The numbers for March are in Redondo Beach saw another solid month with  89 homes sold in Redondo Beach and a median home price of $893,000 which was slightly up from the previous month.  There is a healthy number of new construction projects coming out in both north and south Redondo which is helping keep the home prices up.

Redondo Beach saw an impressive number of homes selling in September of 2015 to end the summer selling season with 97 closed escrows.  In addition the median home price in Redondo was $875,000 which shows significant gains in value over the past year.  The market was hot throughout Redondo Beach with homes in both North and South Redondo often selling quickly and with multiple offers.  Click here to see all of the homes sold in Redondo Beach in September of 2015.

For buyers (and sometimes even sellers) unfamiliar with the differences in local market in the South Bay, Redondo Beach is just one single real estate market.  In reality the differences between neighborhoods can be significant and home values and prices show a clear distinction between similar homes in North Redondo and South Redondo.    The city has a number of distinctive neighborhoods but the main sections are broken into North and South and the dividing line is basically 190th Street.  North Redondo is quite a bit less expensive due to the location as it sits behind Hermosa and Manhattan Beach so there are no homes with ocean views and the feel of the area is different as it’s not along the water.  South Redondo ends at the beach and the ocean to the west and has a unique beach charm and homes often have great views.  The recent listings and sales of very similar homes, both in terms of style, layout, size and new construction, make clear the differences in values. Below is a map showing the general layout, location and dividing lines between north and south Redondo Beach 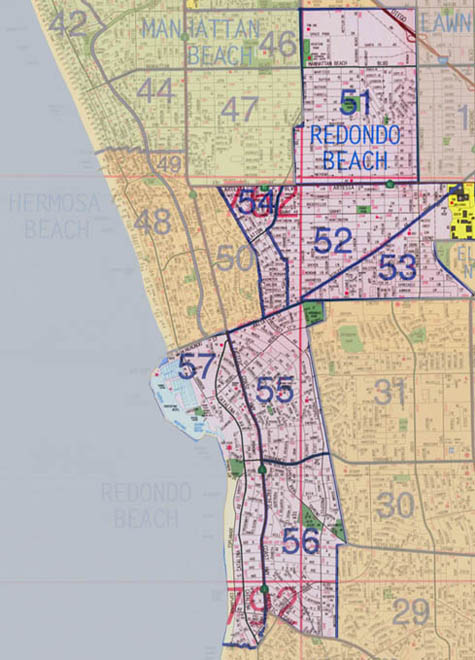 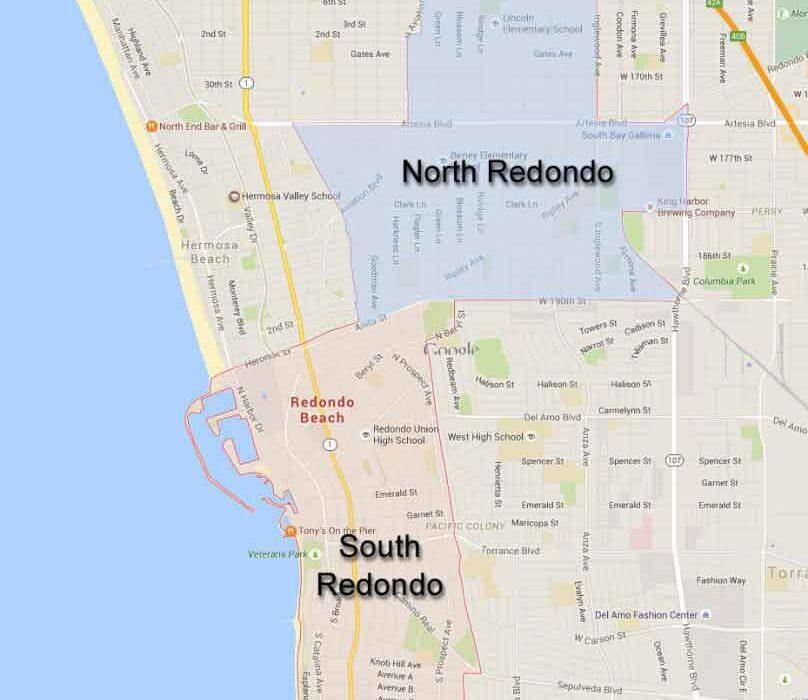 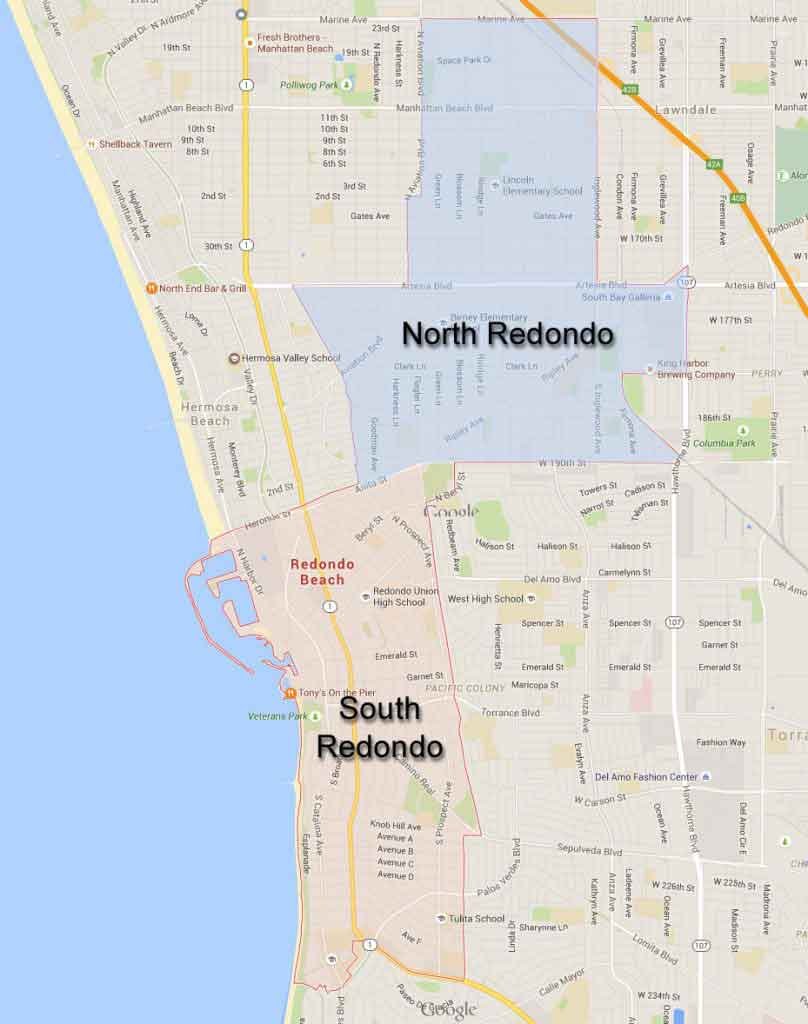 just about every buyer.  The city is a rather odd shape and is squeezed in between Manhattan Beach, Hermosa Beach, Lawndale, Hawthorne and Torrance.   Unlike some of it’s neighbors the zoning in Redondo Beach has allowed for far more styles and types of homes ranging from large condo complexes, retirement communities, 2 on a lot and 3 on a lot townhomes, and single family homes.

From a real estate standpoint the city of Redondo Beach is broken into two distinct areas…..North Redondo and South Redondo.  Each has a very different feel and a fairly different price range. The general dividing line is generally at 190th Street.

The primary difference is the location and the “feel” the areas have due to that location. 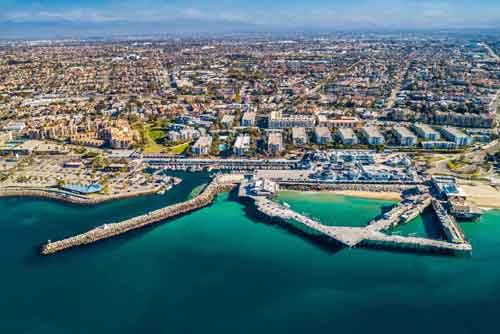 North Redondo is landlocked between Manhattan Beach, Hermosa Beach, Hawthorne, Lawndale and Torrance.  The area , with the zip code of 90278, has some great housing options that are generally priced lower than South Redondo beach but none of the neighborhoods have much of a coastal feel and none of the areas offer any type of ocean views.  One of the most prevalent types of homes in North Redondo are townhomes but may not be what many think of when they think of endless rows of identical homes.  The main types of townhomes in Redondo are known as 2 on a lot and 3 on a lot townhomes.  The entire “complex” consists of 2 or 3 units and many, especially when detached, feel like single family homes. Some of the more notable neighborhoods are the Golden Hills which lies just east of Hermosa and offers primarily single family homes with square footage around 1800 feet. The other area consisting of primarily single family homes in on the eastern border and known as the TRW tract.  Throughout North Redondo there is a mix of types and styles and prices generally range from the low $500Ks to over $1,000,000.   Visit the North Redondo listings page to see the current homes for sale in this part of Redondo Beach.

South Redondo sits on some pristine coastline and has a much “beachier” feel.  Due to zoning this part of town has some very large condo complexes, especially along the water.  South Redondo with the zip code of 90277, offers numerous two on a lot townhomes (3 on a lot townhomes are more rare in this part of town), condo complexes and single family homes.  Some of the more well known buildings are the Seascape condos near King Harbor, the various oceanfront buildings of the Esplanade, The Village, and Brookside Village.  Prices range dramatically due to the factors of proximity to the beach and the ocean views but is consistently higher priced than North Redondo.  In addition to the beach, this part of town offers an abundance of activities and sites from King Harbor and the Redondo Pier, to Riviera Village, Seaside Lagoon, Wilderness Park and more.  The schools are great in both areas.

As mentioned, prices range higher than in the North Redondo area.  To see the current homes for sale in South Redondo visit our South Redondo real estate information page.

One of my favorite areas in North Redondo Beach is known as the TRW tract.  It’s named this as it’s nearby the form TRW building that graces the skyline of the South Bay (it actually is the skyline) nearby Manhattan and Redondo Beach.  The building is now Northrup Grumman but the name given to the neighborhood long ago remains the same in local real estate circles.  Many engineers from TRW originally lived in the neighborhood which is the reason for the name.

What makes this specific part of Redondo Beach unique is a combination of large lot sizes and zoning that generally only allows for single family homes.   This zoning, along with numerous streets with only one way in, gives the area a very family friendly community feel with parks and schools within walking distance (as well as work for some Northrup employees).  In addition most homes are still “reasonable” sizes for the lots with minimum “mansionization” that’s overwhelmed some nearby areas.   The TRW tract has still retained it’s 1940’s type coastal charm.  Contact us to view the current listings or for more information or visit the daily listing update page to have us do the searching for you.

in Uncategorized Posted by Keith Kyle